John's birthplace, Woodkirk, Ardsley still has annual Horse Fairs (Lee Fair and Lee Gap Fair) with Royal Charter awarded by King Stephen in the 1100s.   In the earliest times it was a place where saddlery of the highest quality would be bought and sold. Legend has it that patrons travelled across Europe to visit the Fairs.

For reference and context only : The news of the Navy's victory at Trafalgar reached the Admiralty in London on 6 Nov 1805 at 0100 hrs.


1807 Nov 22    baptism of  : "George Crockford, son of John Barber Field & Sophia his wife" at St.Andrew's, Canterbury
1809 Nov 28    baptism of their daughter Louisa Field, at St.Andrew's, Canterbury.
1815 Oct 31 & Nov 01 victim of crimes.   In an archive of proceedings of the Old Bailey, London of 1815 he is shown as a 'hog butcher' who was plaintiff in a case of shop-lifting. In another case, together with his young son George, he is shown again on the record as an injured party when George was victim of a street robbery.  It is clear from the evidence that the above events happened close to The Tower of London.  The relevant Old Bailey proceedings are transcribed here = link 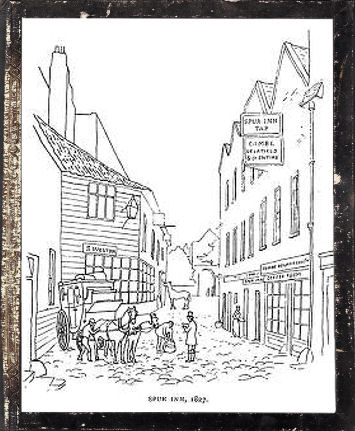 Drawn by J.C.Buckler 1827 In the above image the terrace on the right is The Spur Inn and coffee room. Facing are the booking-office and stable block.
On wall of the inn, the Brewer's sign reads "Combe Delafield" which in the 20thC transformed into Watneys.
The drawing is from a book by  William Rendle F.R.C.S. et al.
For more detail click on the sketch, or follow this link :- "The Inns of Old Southwark and their Associations"
One of the nuggets of information to be seen is that in 1667 diarist Samual Pepys wrote about a serious fire at the 'Spur'.  In that year folk would be rather twitchy about 'fires' given that the Great Fire of London happened in the previous year, albeit on the opposite bank of the River Thames. 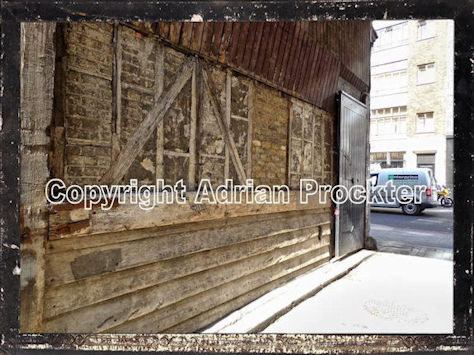 Above, in more recent times Mr Prockter reveals
some of the Spur's ancient timbers.


1851 June 25   John died aged 73. (Winterschladen bible)
Now for evidence of place?  It was a Wednesday and only three working days before the commencement of Quarter 3. However, data at Ancestry.co.uk is incomplete - - a hand-written facsimile page is missing and we must rely on a summary page which leads us to 1851 Quarter 3 (burials?); & [2] Westminster, St.Margaret's (data); & Vol.1, p338. I favour this church record, as in 1822 JBF's sons John and Thomas (II) were baptised there!
So, our saddler/hog butcher seems to have been a parishioner at Westminster, St.Margaret's from 1822 until 1851, a worthy member of that congregation I think.

I believe there is a bloodline to this John Barber-Field from Tudor mathmatician John Field b.1522 the English proto-Copernican, astrologer of Princess Elizabeth Tudor b.1533. Go there  Three centuries earlier than our John Barber Field, the proto-Copernican would trodden the same London streets. They were both from St.Mary's, West Ardsley, Woodkirk, West Yorkshire, Merry England.

All pages of this site are subjected to regular reappraisal and amended accordingly.