The webmaster found this Will on the internet in a very poor state, and typical of many transcriptions it appeared to have
suffered from OCR mishaps.  The following interpretation has been thoughtfully re-written to suit today's readership.
Much of the archaic wording remains, otherwise as with all pages in this site it is 'work in progress'.
Readers are invited to comment via the email patch at the foot of this page.
-----------------------------------------------------
The Will

I John Field of Ardeslaw, fermor, and sometymes studente in the mathematicall sciences, being weak and feeble in body but of good and perfect memory, laud and praise to Almighty God; do make, ordain and declare this my present testament containing therein my last Will in manner and form as follows, that is to say :  First and principally I bequeath and commend my soul unto Almighty God my Creator, and to his dearly beloved son Jesus Christ my only Saviour and Redeemer in whom and by the merits of whose precious death and glorious passion, resurrection and ascension I hope and steadfastly believe to have full and clear remission done and forgiveness of all my sins and offences.  And my body to the earth to be buried "in the church porch at Ardsley, where I am now a parishioner".
Item.
I Will that all such debts and sums of money whatsoever as I shall be indebted in, or owe of right by bond obligatory, bill or conscience, unto any persons at the time of my decease shall be well and truly answered, satisfied and paid by my executix hereafter named.
Item.

Whereas I do stand bound unto John Franklyne of Little Chart of Kent esquire, by my deed obligatory (life insurance ? ) in the sum of two or three hundred pounds with the condition that if God do call me out of the World before my wife Jane that then I shall leave her the said Jane with the sum of one hundred pounds at least in money, plate, household stuff or other chattels as by the condition of the said obligation or at large yet doth and shall appear.  In consideration whereof as well in performance of the same condition of the same obligation as also for diverse other good reasons and considerations me now moving, I do give unto the said Jane Field my wife my whole interest, title and farmhold lease or leases and terms of years that I now have, or shall have hereafter of my farmhold wherein I now dwell.  And the water corn-mill [3] belonging to the same, with all the houses, buildings, lands, tenements, fytts (decorations ?) and hereditaments whatsoever with all and singular their appurtenances to the same belonging or in appertaining, as I now said John Field enjoyeth the same with the moiety or one half of all my moveable goods, as oxen, kine, young beasts, cattle, horses, sheep, colts and calves and the moiety, or one half of all my said moveable goods, as live or dead whatsoever.  And also the moiety or one half  of all my corn now in the barn and growing on the ground now sown, with the moiety of my hay.  Also I give unto her all my goods within my bed-chamber wherein I now lie, with all household stuff and furniture within the same chamber to her purpose forever.  And the said Jane to have and to hold the said farmhold her natural life if the said lease, or leases continue.  And if it fortune her to die before the end of the same lease, or leases be expired then my will is that she shall, by her will and testament in writing or otherwise, dispose of the same, her interest and possession of my said farmhold to such one of my child or children as to her wisdom shall be best liked of.
Item.
I do give to James and Martin Field my two youngest sons all my plate and jewels of gold and silver equally to be divided between them with either of them a bedstead with the furniture having a featherbed, blankets, sheets and counterpanes to the same.

The Rest and Residue of all my goods whatsoever.  My debts paid and my funeral expenses discharged, I give and bequeath the residue to my eight children, to be bestowed upon them equally at the discretion of my wife at such times and sessions as they shall be thought sufficient by their good mother and dispose the same with the consent of my Supervisors of this my last will and testament hereafter to be named.
Item.
I do ordain and appoint the said Jane Field my true and lawful wife to be my sole executrix of this my last will and testament and do nominate [4] Robert Greenewood, gentleman; and [1] Robert Allott of Bentley, tanner; and Mr William Dyneley of Swillington to be supervisors of this my last will and testament, beseeching everyone of them to perform the special trust I have reposed in them to see the same executed according to my conscience and my true meaning of the same.
In witness whereof I the said John Field to this, my present last will, have set my hand and seal the day and year above written.
These being witnesses and sealed and delivered in the presence of us, John Naler, John Adamson.


End of the Will

[1] Joseph Hunter in The Gentleman's Magazine 1834, p.494 describes 'supervisor' Robert Allott as "- a nephew of Armigael Ward, navigator -".  There is a distinct possibility that Armigael Ward himself could have been known to the Fields of Ardsley as his mother was sister of Alured Comyn, Prior of St.Oswald's, Nostell.  [i.e. Allott was a nephew of Ward; Ward was a nephew Comyn].  John's primary school at Woodkirk Monastery was a settlement beholden to Nostell, and the distance between the two places is only ten miles.  So, it seems that the young John Field, future publisher of ephemerides for navigators might have been inspired by the daring-do of Armigael Ward his friend's uncle.  In such circumstances it is tempting visualise a scene metaphorical to that in the "Boyhood of Raleigh" by J.E.Millais

[2] Noun "gossope": A search of the internet will show other examples of the word, and some variations. For example a 'Gossop' could be a god-father, but as John was about 65 at the time of his will, I think 'his' gossope would be in a reciprocal sense, i.e. referring to a god-son.  We can be sure that there was a bond between our John, and William his 'gossope'.

[3]  This image shows the remains of an old corn-mill on the course of Woodkirk Beck at  Hey Beck Lane. Could this be the mill in the Will ?  The masonry certainly seems old enough. 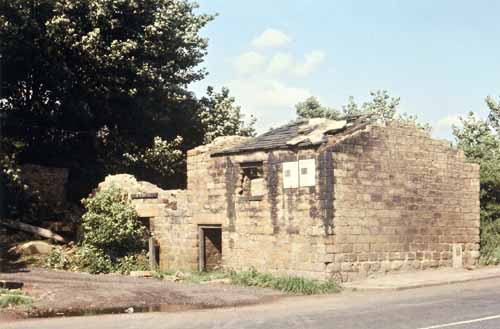 From the Leodis/David Atkinson Archive at Leeds City Council

Since demolished, we should be glad of Mr Atkinson's attention to this old mill.


[4]  One of the supervisors of the will, Robert Greenewood, a gentleman, is believed to have been the same person who died c.1638 according to this link Visitation of Yorkshire 1665 - 1666 p.246 .  And for reference only, the family tree therein also shows that Greenewood's son, Lieutenant of Horse in the service of King Charles I, i.e. Ferdinando Greenewood was 'slayne' in the English Civil War at the Battle of Newark.

[4a]  Ferdinando's brother Charles is also in that family-tree and described as Cornet (standard bearer) to Captaine Gascoigne.  The webmaster knows that a senior Royalist officer, William Gascoigne of nearby Thorpe-on the-Hill, Leeds died at the Battle of Marston Moor, nr York.
I think that this Gascoigne was, in happier times, an astronomer and instrument maker, and an associate of Crabtree (Manchester) and Horrocks (Southport) who in 1639 predicted and observed for the first time a transit of the planet Venus across the Sun.  [My source, a booklet, 'Three North Country Astronomers' by (Professor) Allan Chapman.]