1905 Aug 27, born at 82 Higher Temple Street, (Ardwick/Gorton) Manchester.  Son of umbrella maker Harry Royle and his wife Helena.
The Registrar who recorded his birth was Emmeline Pankhurst who became famous as leader of the Women's Suffrage movement.

1934 Mar 29 He married Dora Phillips, of 25 Bosworth Street, at St.Aiden's church, Openshaw, Manchester.  Syd's address at the time was 21 Broadstone Road, Stockport, Cheshire. He was an electrical engineer and Dora was a dispensing assistant in a chemist's shop.

1936 August As his father, licensee of the Long Pull beer-shop at 21 Broadstone Road, Reddish had died Syd took on the business and the family moved their
home to Reddish from Burnage.

1941 April 30 World War II he was called up (aged 36) to serve in the Royal Air Force. He trained at West Drayton as an Electrician II. His duties were installation and servicing of radio and radar equipment, a job which required travelling all over the country to work on aircraft in service. One episode of Syd's experience remembered by the webmaster was when he was posted to North Wales at a place called Hell's Mouth - - - it had been decided in high places that airborne radio equipment had to be standardised across the Allied forces which in this case involved receiving new aircraft from the U.S.A and removing the beautifully made Collins equipment which was immediately heaved into a local quarry ! 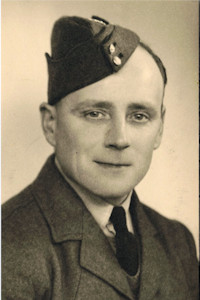 1945 September 27 He was released from the R.A.F. to continue family life with Dora, Geoff and Barrie.
R.A.F. character reference (Form 2520A) = V.G. (Defined as .... the highest character reference which can be awarded by the Royal Air Force) // and, R.A.F. skill in trade = Supr (defined as superior)

1950 By authority of the local magistrates the licence of the Long Pull beer sales shop was changed for the better to include wines and spirits, and tobacco sales.

1975 December Syd (age 70) and Dora retired from business to live at 4 Lichfield Avenue, not far from the old shop,where they lived out their retirement among friends.

In the name of simplicity, data sources in general are omitted.

One of Syd's cars added here for its historical value. 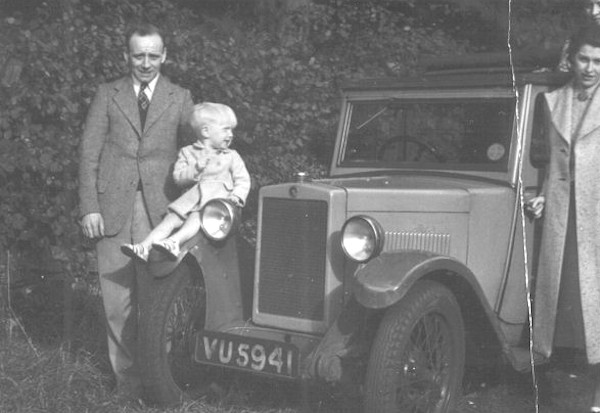 The toddler above [b.1935] was an earlier version of the Webmaster.